Knowing which type of acne scar you have can help in determining which treatment procedure will work best for you. In general, there are four major categories of scars: rolling scars, boxcar scars, ice pick scars, and hypertrophic scars. These types are based on the shape and projection level of the scars. 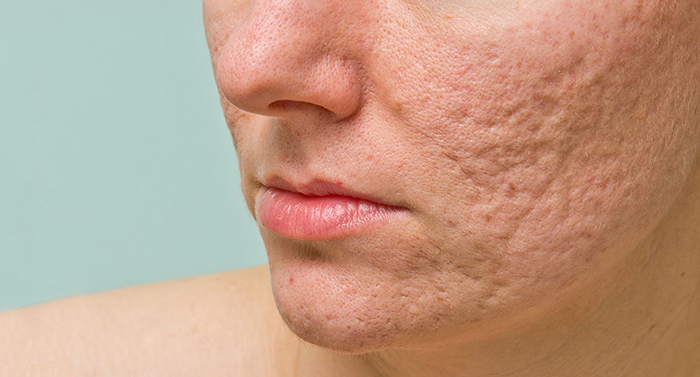 The word “atrophy” refers to a tissue that has degenerated to the point of wasting away. Atrophic acne scars are areas of skin that have sunk due to the destruction of the collagen underneath. Such scars can form after a person heals from bad inflammatory acne that leaves the skin with pitted scars.

The term “depressed scars,” on the other hand, is actually a catchall phrase for several types of acne scars that have caused an individual’s skin to sink beneath the layers of surrounding healthy skin. The loss of fat and tissue after a breakout can cause boxcar scars, ice pick pits, or rolling scars to develop, which can be described as both atrophic and depressed.

While depressed scars form a crater on the skin, other scars are “hypertrophic.” This means that additional scar tissue causes the fibers to raise instead of sink into the skin. Such scars are known as keloids or keloid bumps. The scars occur when the body produces too many dermal cells or connective tissue cells known as fibroblasts in response to the trauma that cystic acne creates. Therefore, the resulting keloid scars are often raised and of a different color than the skin. Keloid scars can be treated with cortisone injections to flatten the projected skin and retinol or laser treatments to address uneven skin tone.

While most scars have round edges, boxcar scars have straighter edges caused by similar inflammatory acne conditions that cause other indented scars. Their shallow appearance, defined edges, and flat bottoms make them similar with chickenpox scars. Boxcar scars may be just as pitted and uneven as other angular scars, but they aren’t usually as deep as ice pick scars.

When collagen collapses and the skin sinks into pits of depressions, the skin looks like it has been poked or stabbed with an ice pick – hence the name. Ice pick scars are deep and pitted, appearing as huge pores dotting the skin.

Sometimes, the skin appears it has the topography of small hills and mounds after acne has subsided and healed. These are called “rolling acne scars” or “rolling hill scars.” This appearance is due to the manner in which resulting bands of tissue are created deeper beneath the surface of the skin.

This article is a revised version of and an excerpt from the “Ultimate Guide to Scars from Pimples and Cystic Acne,” which can be found here.

Weight Loss: Top 9 Vegetables To Include In Your Diet To Burn Belly Fat